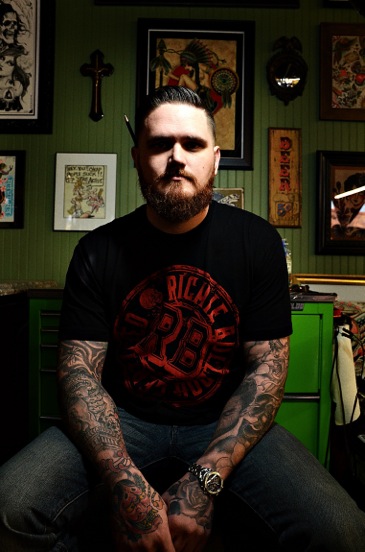 Born and raised on the Mississippi Gulf Coast, Ben Rusher’s love for art began at an early age.

“Art has been a passion of mine for as long as I can remember. My grandma always says that I was the easiest kid to take care of because all she had to do was give me a pen and some paper and I would be happy for hours...”

Throughout his grade school and college career, art continued to be an essential part of Ben’s life. He drew as often as possible and would surround himself with people who inspired him creatively. In his early 20’s, Ben would often spend time with his friends at Barking Dog Tattooz, in Gulfport, MS; however, he never anticipated the opportunities these relationships would later bring. In 2008, Blane Hoffman, owner of Barking Dog Tattooz, gave Ben his first glimpse into the tattooing industry by offering him an extensive formal apprenticeship. After countless hours of hard work, paying his dues, and working for free, Ben completed his apprenticeship and moved to Mobile, AL, where he worked alongside many talented artists, including: Billy Jordan, Rob Martin, and Tom Smith.

In addition to a substantial travel schedule, Ben is a resident artist at both Twisted Anchor Tattoo Gallery, in Ocean Springs, MS, and Tattoo Zone, in Mobile, AL, where he specializes in the American Traditional, Large-scale Japanese, and Black & Grey styles of tattooing. Ben is continually inspired by many artists within the industry, including: Tim Hendricks, Luke Wessman, Mike Rubendall, Justin Weatherholtz, Bob Tyrell, Grez, Chris Garver, Billy Jordan, Jeff Gogue and all my friends at Off the Map in Easthampton.

“... I admire their work ethic and learn so much from these guys every day.”

Ben enjoys all aspects of tattooing and takes advantage of every opportunity to challenge himself creatively, travel, and further develop his skills. He is extremely appreciative of everything tattooing has allowed him to experience throughout his career.

“Tattooing is kind of like a magical job. I get to travel and meet so many amazing people and be a part of their lives and whatever they are going through at the time. What other job lets you do that?”

Ben is especially thankful to everyone that he has met and that has helped him along the way including his family and friends, Blane Hoffman, Matt Stebly, the “Wolf Knife” crew.